The “Viparspectra” brand of grow lights is manufactured by the Shenzhen Bailuo Tecchnology Co. Ltd., which has its base in Guangdong, China.

These budget friendly LED grow lights have been extremely popular in recent times and have been well appreciated by professionals as well as novice and intermediary growers.

The Viparspectra LED grow lights boast of a well balanced full spectrum light that mimics natural sunlight and has its share of light in the IR and UV range as well.

The lights have been scientifically engineered to keep a balance between the High PAR/ Lumen value and the coverage area.

Apart from the specifications, the reason behind the popularity of Viparspectra grow lights is the customer service that it offers and the promptness with which the problems are taken care of.

The Viparspectra 1200W UL certified LED grow light is one of the most advanced and powerful  grow lights that Viparspectra has in store and one of its most popular models. 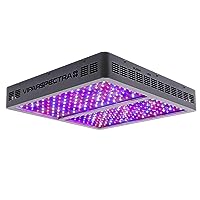 Thus it can be installed easily in any grow space set up with the help of the hanging kit and the adjustable rope hanger that accompanies the kit. The kit also includes a 6’ power cord and an instruction manual.

The plug and play LED grow light does not require any external ballast and can be just plugged in to an electrical power outlet and switched on to get started. But the Viparspectra 1200W LED grow light is not waterproof and hence is suitable for indoor use only .

The Viparspectra 1200W LED grow light as the name suggests delivers 1200W which can be compared to the light produced by a 1000W HPS grow light system, though some users claim that this isn’t true.

Actually they are capable of replacing a HPS system of 850-900W. The LED grow light comprises of 240 pieces of 5W LED chips.

The Bridgelux/ Epiled LED chips are of extreme high intensity and have a 90 degree pre-focussed optics so that a precise spectral composition is achieved along with unrivaled performance,  electrical efficiency and longevity.

The well balanced blend of white, blue and red LED chips along with ones in the UV and IR range together provide a full spectrum light that mimics the sunlight.

The full spectrum light facilitates optimum growth of the plants through all the growing phases.

The presence of the rays in the UV and IR range also ensure that the light supports the growth from the germination of the seeds through the vegetative state facilitating longer stem and nodes, the blooming stage wherein large flowers are yielded.

Additionally there are two separate switches to control the spectrum in the vegetative and the blooming stage.

This also ensures that there is minimum wastage of light and most of it is absorbed by the plants allowing a scope for higher yields.

The one element where the Viparspectra 1200W LED grow light falls short is its PAR value. The PAR value depends on the height from which the light is hung.

If you compare this with some of the advanced grow lights available in the market, you can well find that some of the lower power lights have higher PAR values and are less expensive than the Viparspectra model we are discussing about.

Though that doesn’t mean that the light intensity provided by this light is in any way less for the growth of the plants and  the intensity is good enough for the effective and optimum growth of plants.

But when compared to other LED grow light models of similar specifications the PAR value is considerably less.

When you are using grow lights, the heat dissipation is a common matter of concern as it can not only over heat and damage the grow light and thereby reduce its lifespan but can also provide enough heat that may reduce the plant growth or even damage them.

Though the LED lights themselves do not emit much heat compared to the other forms of grow light systems but to do away with the problem of overheating the Viparspectra 1200W grow light has been equipped with an efficient cooling system that produces 70-75% less heat.

The grow light has built in aluminum heat sinks that absorb the heat emitted from the light along with 6 pieces of highly advanced cooling fans that brings about effective dissipation of the heat.

Though the inclusion of so many fans may make you think that the grow light might emit a lot of sound but that’s where the Viparspectra 1200W LED grow light again scores over the rest.

Make sure that there is enough headspace above the unit when you are hanging the growlight in the grow space to maximize the effect of the cooling system.

We have already mentioned before, that this 1200W cannot be compared to or cannot replace a 1200W HPS system and can only be compared to a 850-900W HPS system, but even then the electrical consumption or the power consumed by the grow light system is much less than that of any HPS system.

The Viparspectra 1200W LED grow light consumes a maximum of 520W (+/- 3%)  in terms of electricity. The electrical consumption is almost reduced to half (around 260W) when only one of the channels is switched on and depends on the channel to LED ratio.  Thus we can well say that the running cost of the grow light system is very low.

The Viparspectra 1200W LED grow light can cover an area of 4.5’ x 4.5’ though the optimum coverage area is a little less.

This is not much as some lower intensity and cheaper models have better coverage area but if you consider the growth then the Viparspectra  provides uniform well balanced light all throughout when it is used for a grow space with the above mentioned dimensions and even the lower parts of the plants receive the light.

The manufacturers provide a three years local warranty with this grow light. There is also a 30 day money back policy wherein if you are not satisfied with the product then you can return the product and the company will return the full amount paid for the product to you.