When it comes to hydroponic gardening, one of the most essential requirements after a grow tent is the grow light. The main source of light for the grow plants, there are a wide variety of grow lights available in the market, but in the recent past the LEDs seem to have replaced the other variants in most cases.

The obvious reasons behind this shift being less electrical consumption which leads to low running cost, less consumption of space and almost no generation of heat and above all, if you choose the light carefully you get a wide spectrum or a specific spectrum suited to your growing requirements as well.

King Company is one of the leading manufacturers of LED grow lights and the King 1200W LED grow light we are about to discuss is a part of the King Plus Series. 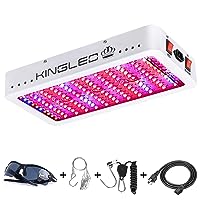 The King Plus 1200W Full Spectrum LED Grow Light is one of those full spectrum LED light systems that are capable of growing healthy plants and supporting them through all the stages starting from the vegetative state to the flowering stage.

This small and compact LED grow light system has an overall dimension of 15.75” (length) x 8.39” (width) x 2.37”(height) and weighs around 6.61lbs. It can thus be hung easily from any frame and can fit in almost any grow tent system. The LED grow light has a durable and sturdy built.

The King Plus 1200 W full spectrum LED grow light is said to have a lifespan of 1,00,000 hours. Though it’s always recommended that there should be a rest period of approximately 20 minutes after a continuous 7-8hours of work.

The King Plus 1200W LED full spectrum grow light is equipped with 10W Dual chip LEDs. These dual chip LEDs are known to have more penetration power and have more dense and intense light. They are more efficient than the traditional 3W and 5W that are present in most LED set ups.

The dual-chip LEDs are scientifically engineered to maintain the balance between the PAR/Lumen output and the coverage. The LED grow light comprises of 120 pieces of these 10W dual-chip LEDs.

Every LED is further equipped with a resistance so that it works individually and the damage or non-functioning of an individual LED does not affect the working of the other LEDs or the grow light as a whole.

This is an exceptional feature and can save a lot of hassles as sometimes a single or two LEDs are damaged and you can still carry on with the same grow light without having to replace it completely.

The combination of these color LEDs create a well balanced light while the blue:red ratio affects the photosynthesis process. While the blue light enhances growth during the vegetative state, the red light produces better flowers during the blooming stage. The full spectrum variation is the best that can be obtained in this price range and serves well for beginners or intermediary level cultivators.

The presence of IR and UV lights also affect the plant growth. The UV light reduces the bacterial growth and eliminates the risk of plant disease while the IR light facilitates stem elongation and the germination of seeds.

As mentioned above these LEDs are highly intense and have a high penetration value. This is because of the mixed focusing angle of 90 and 120 degrees that helps in improving the penetration value of these lights and thereby we can say that it is scientifically designed to produce more usable light.

The design also aids in providing a uniform distribution of light all throughout the grow space. The PAR result of this grow light at a height of 18” is 645uMol and can be easily compared to the intensity provided by a 400W COB. 95% of the light that is emitted can be absorbed by the plants.

Ideally, it is recommended that the light should be placed at a height of 2’ to 3.5’ above the height of the plants while some recommend that the best results are obtained from a height of 18”-24”.

When it comes to power consumption, the King Plus 1200W LED grow light is a winner all along. This highly efficient grow light consumes only 235W in terms of power but will provide you a light equivalent to that obtained from an 800W-1000W HPS light. Thus we can well guess that the running cost of the LED grow light is reduced to a bare minimum and you can save a lot.

Other Uses of this led grow light

This grow light used for growing plants, but it can be also a great addition to any party. You will add some color to your party! you can also add to your party some great accessories like prop money 20s, confetti, and more! Before using the grow light for your garden, check out it at your party and see if it’s worth it. If you’re having a party, add some additions to it. Enjoy!

The King Plus 1200W LED full spectrum grow light system is equipped with an aluminum sink and multiple cooling fans that take care of the heat dissipated from the light. Additionally, there are a few holes in the LED board of the LED grow light that also adds to the cooling effect.

Though LED lights are known to generate less heat but this efficient and effective cooling system takes care of that too and a balanced temperature is maintained inside the grow space. The King Plus 1200W LED grow light is said to dissipate 75% less heat when compared to other similar LED grow lights.

But this highly equipped LED grow light has a few disadvantages as well. It lacks the daisy chaining option that is so common and comes handy especially if you are thinking of upgrading your grow system some day. It is also not waterproof and can be used for indoor use only. The LED grow light also lacks a time though you can use a timer along with this grow light that has to be purchased separately.

The King Plus 1200W LED grow light comes with a 6ft power cord and a single hanging hook which is required to facilitate easy installation. The plug and play LED grow light system does not require any ballast.

The manufacturer offers three years of warranty on the product and a thirty days money back policy. So if you are not satisfied with the product, you can return it to the manufacturer within 30 days from the date of purchase and they would return you the money.